Wilderness Tales, The Long Hunt’s five track debut album- released February 17, 2017- has been out for nearly four months to the day. As such, this post is one of those “been meaning to for a while, but never got around to it” types. Reactions to the cover art, featuring the disembodied head of a three-eyed deer, have ranged from “cool” to “creepy”, “mysterious” to “unsettling”. Is there a story behind the artwork? How was it made, what does it mean? Answers to these questions can be found below. 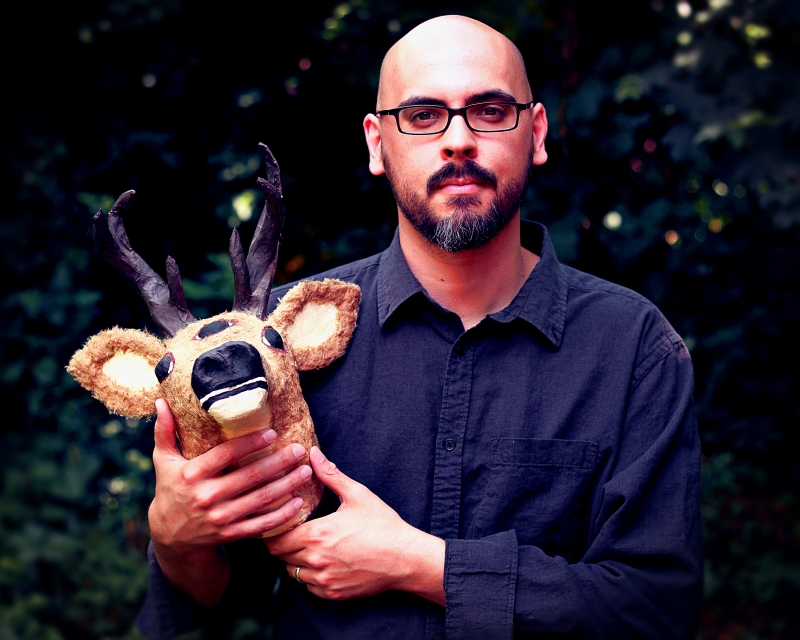 The deer head sculpture itself started its life as a ball of wadded-up newspaper, gifted to our house by the ever generous postman. It was probably the penny-saver coupon book, now that I think about it. Masking tape helped give the ball a little form, and a shortened paper-towel roll gave shape to the nose and the neck. After I had a very basic skull structure made from the paper and cardboard rolls, I started taping wads of newspaper to various points of the skull to flesh out the cheeks, neck, and head. The eyes were balls of newspaper surrounded by aluminum foil eyelids. The antlers a combination of aluminum foil, cardboard, and tape wrapped around wooden grill skewers. The ears were cut out of cardboard and the whole thing was covered in a layer of masking tape to hold it together and give it shape.

Next I covered the entire sculpture with a layer of Papier-mâché (strips of newspaper coated in a flower/water/glue mixture that were stuck to the head). All said and done, I ended up with three separate layers that served to flesh out the head and smooth out the surface. After drying for a day, I painted some basic features on the sculpture, many of which would eventually be covered in hair and painted over again.

The hair used to cover much of the head was made by cutting small sections of a long strand of either jute or hemp rope. Cutting quarter-inch sections of rope at a time with a scissors quickly made a small pile of fibrous rope “hair” that I then stuck to the head using a watered down glue mixture. I stuck the hair on in layers, painting on the glue with a brush and patting on clumps of the hair. I finished the deer by painting fine details around the eyes, mouth and nose.

After drying for a day or two, it was now time to photograph the deer. I knew I wanted to do something with long exposure, where the camera takes anywhere from a few seconds, to a few minutes (or more) to take a picture. There are a lot of ways to go about this, but usually being in the dark helps (otherwise the image is extremely overexposed). I cleaned out a closet in order to make the darkest setting I could with minimal light leakage from the outside. I covered the walls with garbage bags, put the deer on a table with a black cloth, lit some candles, and set up a black light. 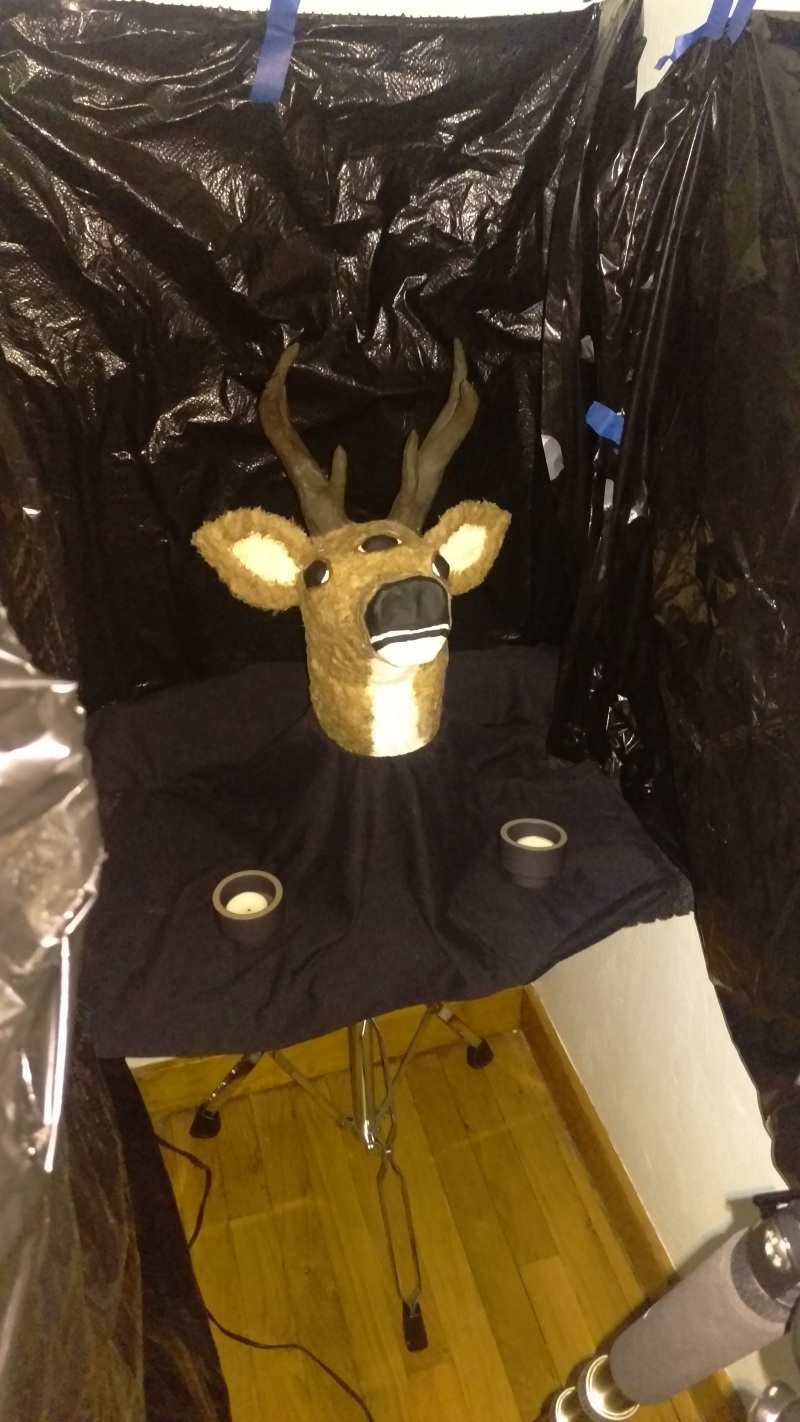 I turned off all the other lights, zoomed in close on the deer, set the shutter for 30 seconds, and hit the button on the camera to start the process. After about maybe 5-10 seconds, I slowly zoomed out with one hand while my other hand waved around a small flashlight with a red filter on it. Once I was fully zoomed out, having maybe another 10-15 seconds left with the shutter open, I shined the red light on various points of the deer to get some lighting effects. The black light, candles, long exposure, red flashlight, reflective garbage bags, and zoom process resulted in what looks like a double image with interesting light trails and other artifacts. Everything was done “in camera” with no editing effects being employed in post (save slight color correction and some saturation adjustments).

As far as the meaning behind this work, I’ll leave that up the the viewer and listener.  I know the “how” but not so much as the “why”. Art defines itself, I simply focus on the process. Hands interpreting thoughts that rise from the deep. As always, the end result was limited by time, materials, ability and circumstance. None the less, I think the image serves its purpose and fits the music well enough. Listen to the album on bandcamp for more insight and maybe it’ll all make more sense!